Hey everybody, it’s Matt here again, and today, I want to take you through Sapporo TV Tower at night in August. I hope you find it helpful for your own trip planning. Be sure to share it if you do, and check back for more articles and videos from our travels in Japon and elsewhere around the world.

After arriving in Sapporo and checking into our hotel, the Hotel WBF Sapporo Chuo, our first sight, the Sapporo TV Tower, was just two blocks away.

A quick question for you!

Before I jump into it though, I just wanted to ask, what’s your favourite tower and why? The only others I’ve been up in are Calgary Tower, Sydney Tower, and Tokyo Skytree. So far, I’ve found each one to have unique flavours, but, even though it’s nowhere near the tallest tower I’ve been in, I love the intimacy of Sapporo TV Tower and the city planning around it. Let me know down in the comments at the end of this post!

Getting to Sapporo TV Tower

Sapporo TV Tower is located at the Eastern-most end of Odori Park in the heart of Sapporo. It’s conveniently located for public transport access with nearby bus stops and the subway running below it. Being in Odori Park, it’s also convenient to access by foot from many of the hotels in Sapporo that are located near the park.

The full address is:

Getting there by car

There are a number of parking lots within 1 block of Sapporo TV Tower. The Sapporo Odori Underground Parking Lot is perhaps the closest. It runs under Odori Park and the Odori Subway Station, also connecting to Aurora Town underground mall. It has space for 366 cars and is across the road from Sapporo TV Tower.

Pricing starts at 390 yen for the first hour and 200 for every 30 minutes thereafter. You can also get one hour free by spending at least 2000 yen at one of the stores in Aurora Town. If you visit between 5pm and 10pm (closing time), the maximum charge is 1000 yen, and if you visit between 8am and 10am, you can get a half hour rate of 200 yen if you are there for less than half an hour.

The next closest car parks are to the south. There are around 4 lots in the blocks directly south of Sapporo TV Tower, including the Marui Imai and Mitsukoshi parking lots. These lots are located on either side of the Toho Subway line, with the Marui Imai being below the Marui Imai shopping centre, and Mitsukoshi on the opposite side of the road. Here, you can expect to pay 190 yen per 30-minute block. Most of these lots are underground, but there are some above ground spaces such as the one below that is almost opposite Sapporo TV Tower.

Getting there by public transport

If you need to come in by train, it’s a 15-minute walk from the JR Sapporo Station and you will want to head out the South Exit.

Getting there by tour

There are some competitively priced full day tours available through Viator that include a visit to Sapporo TV Tower (however they do exclude the entry fee).

Admission fees and other costs

Before you arrive though, make sure you do some research as there are often discount tickets available. At the time of this article, the Sapporo TV tower website has a 20% discount available, just print out the voucher or present it on your phone when you buy your tickets. There are also often discount vouchers in the map books and promotional magazines that louer une voiture companies include with a rental, so check them out to see if it works out any better for you.

Tickets can be purchased on arrival at the ticket counter or pre-purchased for a designated date through Klook. If you opt to pre-purchase via Klook, the pricing is the same as standard full price tickets, however, Klook guests get to jump the elevator queue.

If you book with Klook you will receive a voucher that you redeem at the ticket desk on level 3 of Sapporo TV Tower. Some things to note though is that when booking with Klook your ticket is non-refundable and the date cannot be changed. So you are sacrificing flexibility as well as a possible discount. However, you are gaining time, particularly if it turns out to be busy when you visit because you get to go straight up the lift on the next one that is available.

Normal opening hours are from 9:00 am to 22:00 pm every day of the year except for New Years Day, special events and maintenance. You can check any upcoming closure dates Ici.

Built in 1957 and standing at 147.2 metres high, Sapporo TV Tower is one of the most recognisable landmarks of the Sapporo cityscape. It’s similar in appearance to the Eiffel Tower and Tokyo Tower, though much shorter.

As we approached it, just on dusk, we got to see the lights come on and it really does look quite underwhelming when it is first lit up at night with just minimal lighting.

However, once all the lights come on, it’s quite dramatic.

There is an observation deck located at the 90.38-metre high mark, and it gives you a great view out over the Sapporo skyline, particularly down the length of Odori Park and looking towards the Mount Okura ski jump stadium.

For the Australians, in comparison, Sydney Tower stands twice as high at 309 metres with the top floor being at 268 metres high.

Access to the Sapporo TV Tower observation deck is via lift from the third floor, which is also where you can purchase tickets or redeem your pre-paid tickets.

From ground level, you can either take the stairs or a short lift up to the third floor.

It’s worth noting though that if you opt for the stairs, each floor is higher than normal, so the third floor is more like the sixth floor of a normal building. The stairs are also pretty steeper. A lot steeper than a normal staircase. There are lots of encouraging signs though to help motivate you on your climb!

Once you have your ticket, it’s a short 60-second ride in the elevator up to the observation deck. Along the way, you can enjoy the views and listen to the recorded commentary. English is available, and it provides a very brief overview of the history of the tower on the way up. On the way down, you’ll get to hear a little bit more.

When you get out of the elevator you are immediately greeted with the Sapporo cityscape, looking roughly east.

There isn’t a lot to see out this side at night since Odori Park ends in this direction at the base of the tower, and you are looking away from the heart of Sapporo’s nightlife. That said, if you go at night like we did, you’ll be pleased to see that the deck is minimally lit, meaning it’s easy to take in the city lights outside without reflections from inside the tower.

I found a lot of the little things that were lit up quite interesting, even though they aren’t as spectacular as the view over Odori Park. For example, the Sapporo Hall garden clock to the North:

Even the patterns of crosswalks at intersections seem so much more entrancing from this view at night time, like this one directly below the Northeast corner of the tower:

The deck itself features a lot more information about the tower as well as binoculars and a small souvenir store.

The main attraction, at least at night anyway, is the view to the west, looking down the length of Odori Park.

This side is the side with the most lights and the most interesting city viewing, including the NORBESA Ferris Wheel which features a constantly changing, illuminated pattern.

In the far distance, you can also spot the Mount Okura ski jump stadium, almost perfectly aligned with Odori Park and the Sapporo TV Tower.

While you are on the observation deck, if you find yourself needing to share the views on Instagram but you are running out of data, free wi-fi is available. It’s not super fast, but it’s decent for free wi-fi.

When you are ready to head back down, just push the button the lift, and/or wait in an orderly fashion for the next one to arrive. The lifts run up and down pretty regularly so it doesn’t take long before you are headed back to the third floor.

Once you get there, you’ll find yourself in the paid section, a section you can’t get into without an observation deck ticket. There is a much larger gift store here and you will find a lot of tower-related trinkets as well as wider Sapporo et Hokkaido related gifts. 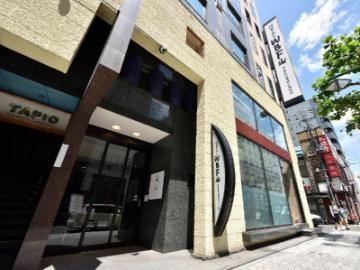